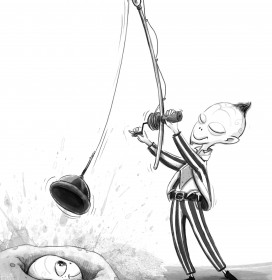 Becoming an inventor was a natural progression for Bunzaud rather than a career choice. He’s been creating unique machines since he was a child.

His first creation to really catch on was the Sucker Plugger which he invented when he was four. It was a device to quieten saucerbabies who wanted more milk but had already had more than enough.

At age sixteen, when he moved into the bachelors’ tower, Bunzaud quickly realised he would need to earn a living with his inventions and the thought thrilled him.  His head was brimming with ideas. Some of Bunzaud’s inventions were wildly successful. Some are yet to catch on. But Bunzaud believes even the failures can lead to the most brilliant successes. You just can’t give up.

It was a spectacular failure that led Bunzaud to a hidden cave where he found remarkable stones, crystals and some previously unknown plants.  His mind whirred with the possibilities. So many applications for these materials. The first thing he made was the spaceship that would soon take him on adventures to alien worlds.

To most people a spaceship may have been an odd choice. The saucermen of Peebleton fear space travel. But Bunzaud was unencumbered by such practicalities. In his mind a spaceship was a brilliant idea. And brilliant ideas must be seen to their conclusion.

It doesn’t take a space adventurer long to realise not everyone in the universe speaks your language. After more than one mishap caused by a lack of communication Bunzaud invented a translator device. Once calibrated, the device worked well, sucking words in the front and pinging the translation out through the antenna on top.

One of the best known inventions in Bunzaud’s home city Peebleton is the Pock Plucker.

When the problem is pock holes the Pock Plucker provides the perfect solution. No longer do parents find themselves kneeling in the dirt, one hand grasping uselessly for their child’s bulbous head. Instead they send a sucker down the hole to get a grip on the baby’s head and raise the little one to safety. There was much rejoicing when Bunzaud demonstrated the Pock Plucker and he sold out of all his stock in twenty minutes.

Find out how Bunzaud’s inventions get him both into and out of trouble in The Adventures of Bunzaud. A novel the whole family can enjoy.

The Adventures of Bunzaud, now available  only at  The Alien Channel Store.