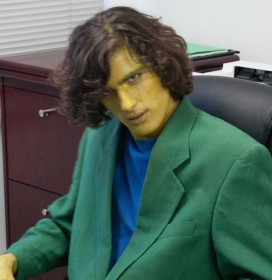 Each episode the extraterrestrial attends a different job interview and discovers there's as many ways to misunderstand humans as there are people on planet Earth.

Across eight episodes of improvised fun, Alien Joe performs alien first aid, opposes slavery and wages war on weirdness - all the while pursuing employment relentlessly.  And his interviewers have more than a few surprises for him!

Armed with a glowing resume and a host of intergalactic referees, Joe meets a happy knife salesman, a rude telemarketer and a husband and wife alien hunting team.