The Year of The Alien Channel 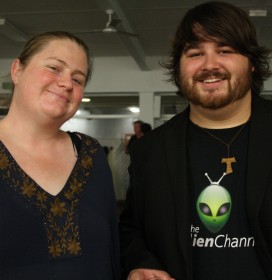 While those who believed in the Mayan calendar were getting ready for the end of the world, screenwriter Celeste Palmer was preparing to start a business - a sci fi business with space and aliens!

In January 2013 Alien Channel creator Celeste Palmer met Liam Murphy and Supriya Perera on separate occasions and after she explained her vision, both came on board as producers for The Alien Channel.  The vision was to work with local artists to create science fiction webseries about space and aliens.

Facebook played a huge part in making contact with artists and gaining a fan base before the channel had launched.

At the first round of auditions the producers met some amazing actors whose enthusiasm was impressive.  Subsequent auditions further proved the acting community of Brisbane is bursting with talented, hardworking people of all ages.  The producers built relationships with The Actors Gym and QUT film students.

On 22 June The Alien Channel filmed its first production Alien Joe, the story of an everyday alien looking for a job on Earth.   This improv comedy stars Patrick Bell as the title character.  Every episode he goes to a different interview where things don't go quite as well as he hopes.

The Men in Really Dark Blue Suits was filmed on 17 August and stars Patrick Bell and Lexadar Meerkat.  The eight-part comedy follows the adventures of two men in black whose suits and abilities fall short slightly as they put the kibosh on aliens who threaten our planet.

In October The Alien Channel filmed The Alien in my Wardrobe about a boy who finds something completely unexpected in his cupboard.  You'll never guess what it is!  The producers were thrilled to work with Jayden Caulfield and Nicholas Hamilton - who took starring roles - as well as some impressive teenagers who played extras.

On 8 November The Alien Channel launched its website with a screening of Alien Joe and a trailer for The Men in Really Dark Blue Suits.

For The Alien Channel 2014 holds more relationship building with artists, ethical businesses and community groups, as well as new series, returning characters and, above all, stories about space and aliens!