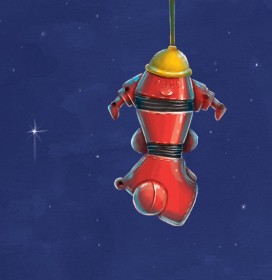 He’s loyal, emotional and has his name embossed on his bottom.

Orbu’s origins are a mystery, but when the robot crashed into Bunzaud’s ship he met two kind space travellers and decided to stay with them forever.

Unfortunately they were being chased by a relentless assassin and their escaped forced them to land on alien worlds - some fascinating, some frightening.

Being a robot, Orbu doesn’t use the toilet, but he’s not above taking an oil leak on someone who deserves it.

Beware of befriending Orbu.  He’s extremely loyal and will stick with you to the very end.

There are mysteries to unlock about Orbu, but you’ll need a decoder medallion to do it!