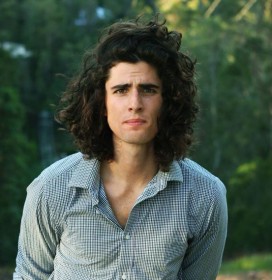 Taking up acting at school gave wild child Patrick Bell a chance to be heard.

When producers at The Alien Channel were seeking an actor to play the title character of their webseries Alien Joe they had no qualms about casting Patrick Bell.

"His audition scenes were hilarious," recalls executive producer Celeste Palmer.  "He played a lion taming alien who didn't speak English but was trying to get a driver's licence.  In another scene he played an alien convincing a Man in Black that Men in Black don't exist.

"We were impressed with Patrick's stage presence and all the interesting ideas he brought to the audition.  We cast him as Alien Joe, an ordinary alien looking for a job on Earth."

The producers were so impressed that they asked him back to the studio to star with Lexadar Meerkat in The Men in Really Dark Blue Suits.

According to director Liam Murphy, Bell brought a lot to the creative process.  "He's talented, energetic, committed to the role and willing to try anything," he said.

Bell started acting in at school when he was in Year 3 and was daunted by all the lines he had to learn.  "But when it came the time to go on stage and I felt the audience react to what I was doing I became somewhat addicted to performing.

"My entire life people have said I talk far to much and as a loud wild child often people would ignore me. I found being on stage playing my violin, singing or monologging in a musical or play, people suddenly wanted to listen to me and it was the best feeling."

Bell says working with The Alien Channel has given him memories that will last a lifetime.  One particularly memorable moment came while shooting the first episode of Alien Joe,  "trying to get through a string of dialogue [with] Stephen Snape, where I was interviewing as a slogan creator.  The laughs we had in the scene will be a memory I will cherish forever."

You can catch Patrick Bell in Maggie and Bus Stop.

Alien Joe and The Men in Really Dark Blue Suits are now available on The Alien Channel.