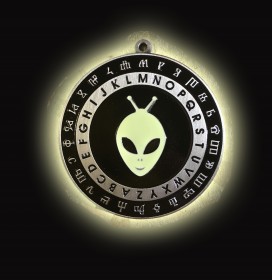 Bunzaud is an inventor who lives in the city of Peebleton on a small alien world. Although fully grown, Bunzaud is only one meter tall. You can read all about Bunzaud’s antics in his book The Adventures of Bunzaud, a novel that’s already delighting children and adults.

Author Dan Zu’ub wanted to impart a special message for true seekers, for those who read all the way to the end of the book and wanted something a little more. So in the last two pages you’ll find a secret story, written in English but encoded with letters from Bunzaud’s home language Peebletonian.

It’s made from brass and enamel and, if it wasn’t already cool enough, it glows in the dark!

The medallion comes with the book and is sure to delight the space adventurer in your life.

Need more than one per book? Additional medallions can be purchased.

The Adventures of Bunzaud  book and medallion set, now available from The Alien Channel Store.